Jean-Bernard Lévy was appointed Chairman & CEO of EDF Group on 26 November 2014. Previously he was the Chairman & CEO of Thales, a leading electronics and systems industrial group, and he headed up Vivendi as COO from 2002 to 2005, and as CEO from 2005 to 2012. During his career he held multiple management positions in corporate finance and communications, including the role of Chief of Staff to Gérard Longuet, the French Minister for Industry, Postal Services & Telecommunications and Foreign Trade. He is a graduate of the École Polytechnique (1973) and Télécom ParisTech.  He is an officer of Légion d’Honneur and of the Ordre National du Mérite.

Georgeta Corina Popescu has been holding the position of CEO of Electrica SA since January 2019. Before that she was General Manager of Societatea de Distributie a Energiei Electrice Muntenia Nord, part of Electrica Group and Transelectrica’s Directorate Chairperson. Between December 2015 and February 2017, Corina Popescu held the position of State Secretary within the Ministry of Energy, during which time she was also a member of the Board of Directors of Electrica SA. Graduate of the Faculty of Power Engineering at the Polytechnic University of Bucharest, Power Engineering Systems department, she has 30 years of experience in multiple positions across the electricity value chain.

Vice-President of Eurelectric, Chairman of the Board and CEO of E.ON SE 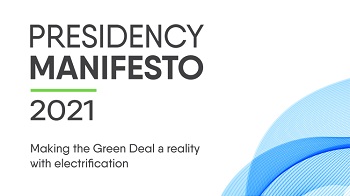